Pardon her (lack of) French!

Since it came out on Netflix in October, Emily in Paris has been a huge success in the US. Darren Star’s new show is a great escape from the reality of COVID-19, but that hasn’t stopped critics (especially French ones) from giving it savage reviews. Their number one critique is that Emily doesn’t speak French. C’est vrai, c’est bien dommage ! It’s true, and a shame!

The show is, however, an interesting introduction to French language and culture. (Minus a serious amount of stereotypes that French and non-French speakers are raging about on social media). Learning French, or at least the very basics, is highly important if you plan on visiting a francophone country! Unlike Emily, you can easily get your French up to par before traveling to Paris! We’ve decided to give you a little tour of the main vocabulary, etiquette and expressions encountered in season 1 of Emily in Paris so that you won’t make the same kind of mistakes as Emily. 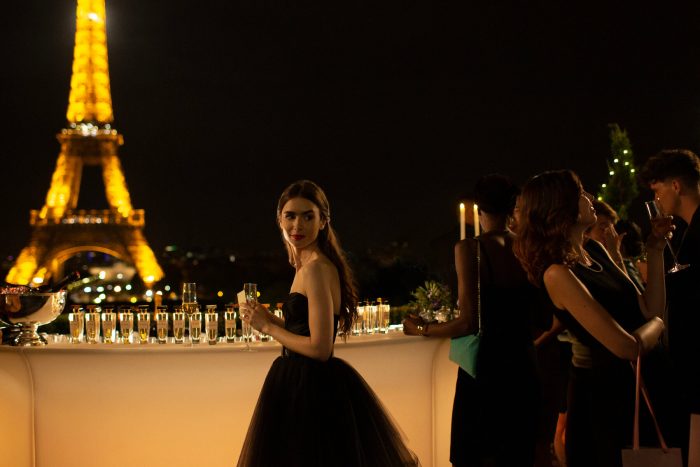 Instead, say “Je suis ravi(e) / je suis trop content(e)” to express your enthusiasm about a current situation and “j’ai hâte !” when you’re excited about something coming up! Also be careful when you want to say “I can’t wait for…”. Do not literally translate your excitement with “je ne peux pas attendre” which means “I don’t have time to wait.” “J’ai hâte” works better. 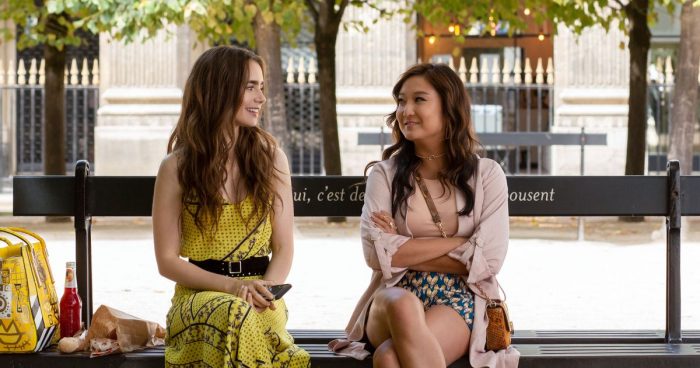 Emilie uses the phrase “C’est la vie” multiple times in the show, but in real life, French people use this expression way less than you might think. We’re sorry to break it to Emily, but only in anglophone countries do you hear sentences like, “She’s got a certain je ne sais quoi,” or “I’m having really intense déjà-vu right now.” These French expressions have taken on a life of their own outside of France. Same goes for “joie de vivre”: it’s highly unlikely that you’ll ever hear a French person say this! So the next time you want to say “shit happens” or “that’s life” in French, try, “C’est comme ça” or “On n’y peut rien.”

Other “faux French” expressions to avoid include “Comme ci comme ça” and “Ooh la la.” No one in France says, “Comme ci comme ça” if you ask how they’re doing. “Oh là là,” on the other hand, is used, but it doesn’t mean that something’s sexy. It’s often used in a negative sense when you’re frustrated or surprised by a bad piece of news. And it’s not pronounced “ooo la la” but “oh [short sound] là là.” 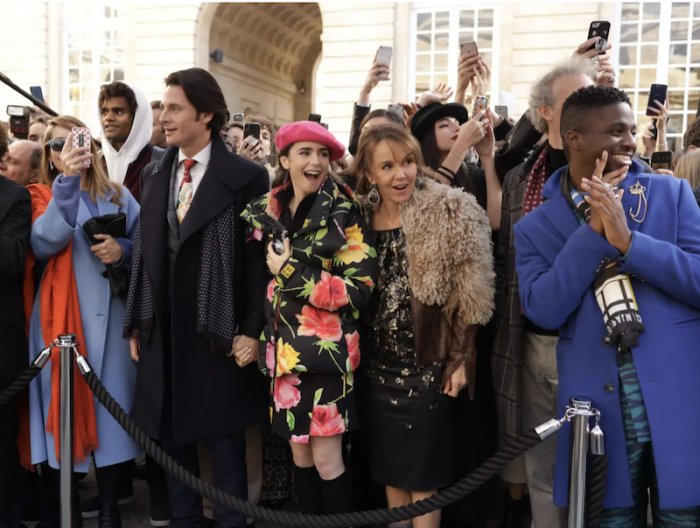 In the first episode of the show, Emily’s boss and her coworker make fun of her by calling her “la plouc.” Emily is confused and later finds out that the English translation is “the hick”.

Plouc is a harsh way of describing someone whose style and lifestyle you consider boorish, and/or lacking in taste. It has strong classist connotations. A plouc would be more or less the equivalent of a hick in english, and it’s a common stereotype applied both to Americans by the French, as well as to French people from smaller towns and the countryside by Parisians.

Exemple : Quelle idée de boire du champagne dans un verre en plastique, c’est tellement plouc ! What a dumb idea to drink champagne out of a plastic glass, who does that?
> You can also use “beauf” (more informal) 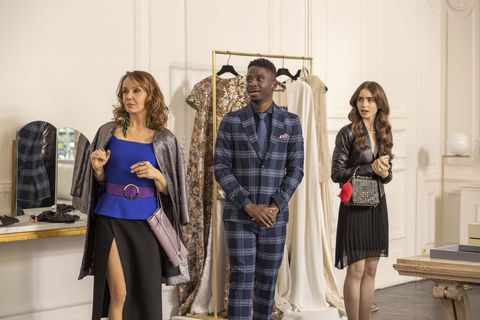 In Episode 6, fashion designer Pierre Cadault yells at Emily “ringarde!” because she’s wearing an Eiffel Tower bag charm. The rest of the team is mortified and Emily is confused.

Like plouc, ringard(e) has the same intensity of negative judgment and sounds more strident, like a slap in the face. It can also indicate that someone or something is out-dated, old school, or out of fashion. 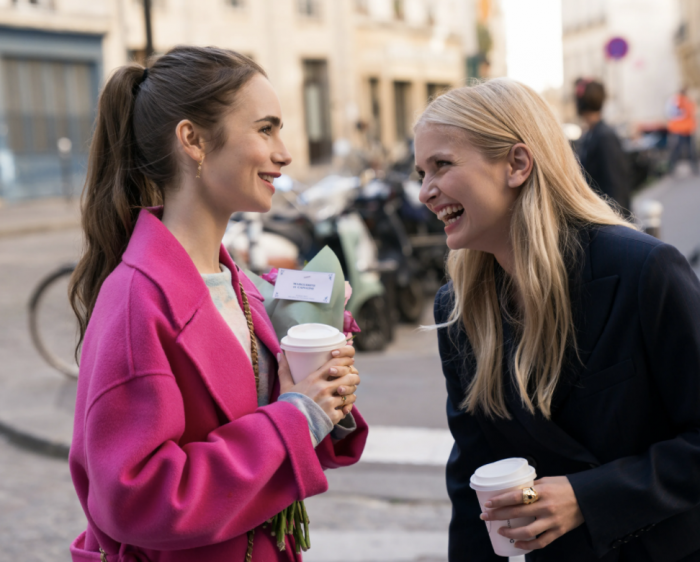 Throughout the whole show, French characters speak to each other in English on a regular basis, just because Emily is around. But this would never happen in real life if they’re not specifically addressing an English speaker!

French people generally don’t speak English to each other – and this is even less likely if they are on the verge of an argument! In the show, there are numerous shots of French people casually speaking English to each other when Emily is around, which seems highly unlikely to occur. We might do it for a couple of sentences when noticing a non-French speaker in the room, but we prefer speaking en français amongst ourselves. Don’t expect all French people to be perfect at speaking English, but you should know that most Parisians in fact like practicing their English and will also be happy to speak to you more slowly in French if you politely say, “Pourriez-vous parler plus lentement ?”

In episode 2, Emily is shocked to realize the word “vagina” is masculine in French. She asks her boss Sylvie, “Why is it le vagin and not la vagin?”

Yes, remembering nouns’ genders is super challenging. And yes, le vagin is masculine (and funnily enough, la bite is feminine!). In general, remember that the gender of a noun is completely random and has nothing to do with attributing masculine or feminine qualities to that thing. In fact, for most French people, grammatical gender is not connected at all to human gender in the way many English speakers, unfamiliar with the system, may perceive it to be. Often French learners stress about using the correct gender when speaking, but in reality these are some of the most inconsequential mistakes you can make as they never change the actual meaning of the thought you are trying to convey.

7. The use of the superlative 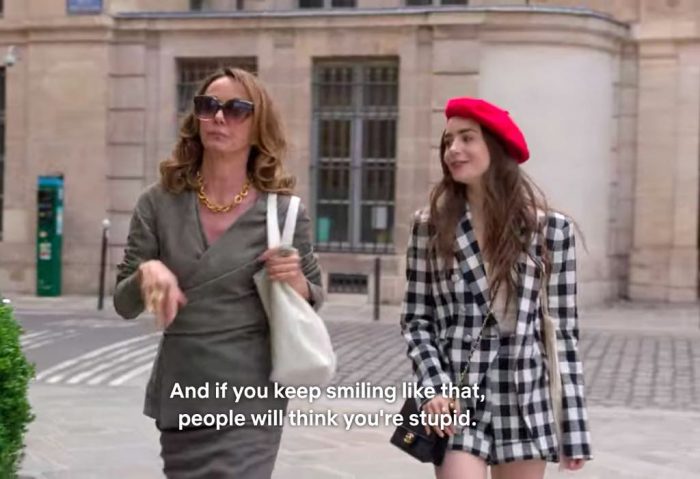 Like a lot of Americans, Emily uses tons of superlatives: “I’m sooo excited to be here.” “This is fabulous”… She’s also criticized for speaking too loudly and smiling too much.

Oui, Paris for the first time, c’est magnifique! But be mindful with the use of superlatives when in France. “you’re the best”, “it’s the best day of my life”, “the best thing ever”, “the worst thing ever”, “my absolute favorite” and so on are hyperbolic. However, French people might think you are speaking literally. The best day of your life only happens once (in French). Therefore, telling someone “you’re the best” in French is a slippery slope. You risk French people calling you a hypocrite if you later call someone else “the best”! To recap, French people tend to be more conservative with the use of superlatives. 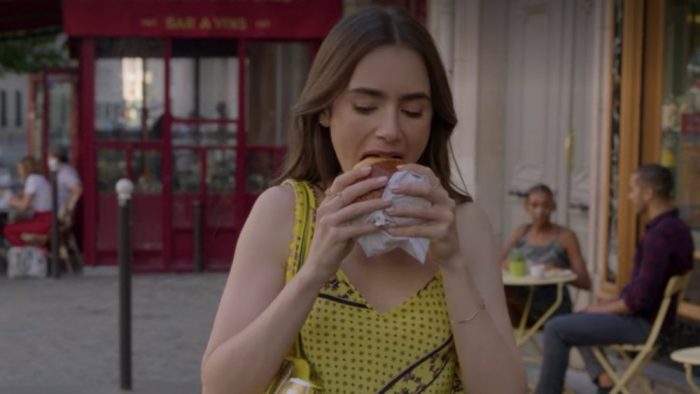 Emily and Mindy constantly pronounce the letter T at the end of French words.

Pronunciation tip: all those Ts at the end of the word are not pronounced! Try this pronunciation: <bun-ah-pay-tee>, <crwah-ssahn> and <pihn-oh-shokolah>. In French, the final consonant of a word is usually silent (the exception to this rule are the letters C,R,F, and L). 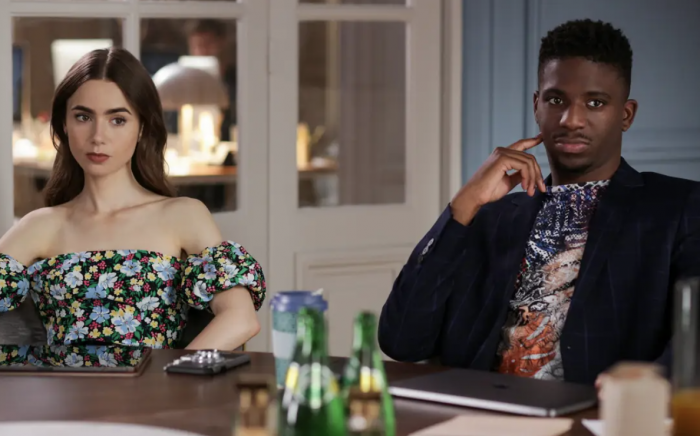 Emily complains about how « difficult” French is to her boss Sylvie in episode 1. We would have less trouble accepting this critique if she’d been able to say it in French… Although Emily is enrolled in a French learning program, we only see her in it briefly during early episodes. And, to be honest, we didn’t notice an improvement toward the end of the season. Pardon her lack of French! We highly recommend that our students, friends and family take a shot at learning French themselves before drawing such a drastic judgment. With the right explanations, rules and cultural context, French definitely won’t feel that “effed up” anymore. And Coucou is here to help you on your language-learning journey!