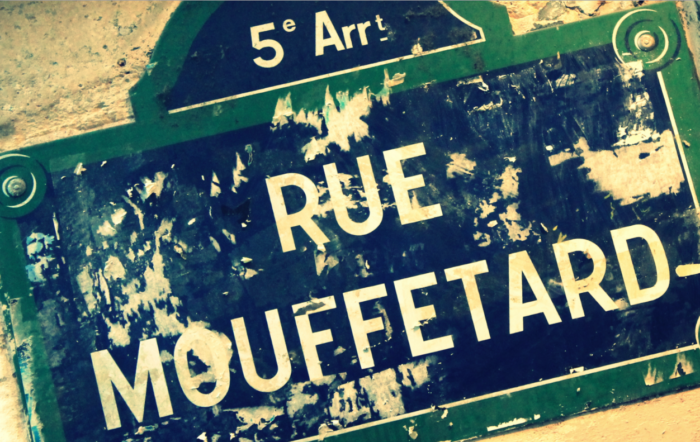 Anyone who fantasizes about wandering the streets of Paris (and I know you do) share similar cultural cues from the films, photography, and novels that have beatified its subject matter. With the popularity of Woody Allen’s Midnight in Paris, and the playful, strolling dialogues of Ethan Hawke and Julie Delpy in Before Sunset, the Paris of the imagination stokes a great fire in the heart of the romantic traveler.

Often over-looked by traditional guide books of Paris, La Rue Mouffetard is a thin, stone-laden street stretching a mere .37 mile, chalk full of eateries, shops, cinemas, and bric-a-brac outlets. The street’s enchanting history, vibrant social scene, and cinematic aesthetics make for one of the most memorable areas Paris can offer.

Located in the Latin Quarter of Paris, the road itself is ancient, dating back to Neolithic times. It was the Roman legionnaires themselves who set the first stone of the Rue Mouffetard, which used to run south to the Place d’Italie, and onward, all the way to Rome. 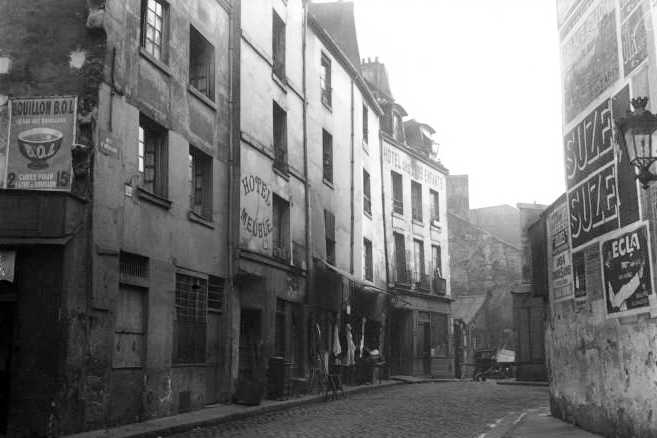 Today, the Rue Mouffetard entrance begins at the corner of Rue Censier, completing its ascension at the lively Place Contrescarpe. What makes the street so resplendent are the flourishing, family owned cafés and small bistros, just a step off the street, snug together and decorated with old world flair, lining its length.

The Rue Mouffetard is one of the great outdoor marketplaces of the 5th arrondissement, with its abundance of stalls overflowing with regional delicacies from the charcuteries – the doors and windows flung open for the casual observer to catch the scents of their delicious wares. Don’t forget the boulangeries and chocolatiers – all offering the most succulent of treats to make one’s mouth water.

Locals and tourists alike shop here on the Rue Mouffetard for their daily bread and meals – and a couple of hours can be easily lost shopping in an old record shop, or sifting through the shelves of the picturesque book store, or noting the matinee schedule of the L’épée de bois, the street’s neighborhood cinema, hidden down a charmingly darkened hallway.

Just off the Rue Censier, past the fontaine pluie Guy Lartigue, at the bottom of the incline of the Rue Mouffetard, stands a medieval church known as the Saint-Medard.

This gothic structure stands solemnly at the base of the Rue Mouffetard. Inside, there is a wealth of architectural and artistic history, with paintings by Phillipe de Champaigne and Jean-Antoine Watteau, and several sculpted key vaults, much of which escaped destruction during the French Revolution.

The Church of Saint Medard also has a masochistic history – this was the home to a religious sect called the Convulsionnaires of Saint-Medard. These convulsionnaires were a group of 18th century religious pilgrims who experienced convulsions as a way of receiving miracles. They were prone to contortions, violently foaming at the mouth, and other frightening spectacles. The people of Paris used to gather outside this church to watch the members speak in tongues, bark like dogs, and swallow glass and hot coals until they collapsed on the street. The spectacles were eventually banned by the King himself, who had a parchment declaration hammered to the wooden door of the church, explaining that “God is forbidden to work miracles in this place.”

Most of the street, along with the controversial Saint Medard church, escaped reconstruction, due to its location set on one the few major hills in Paris, the Montagne Sainte-Genevieve. Baron Haussmann, the mastermind behind the reconstruction plan, declined to destroy any of the near-by architecture during his 19th century development plan to modernize Paris. 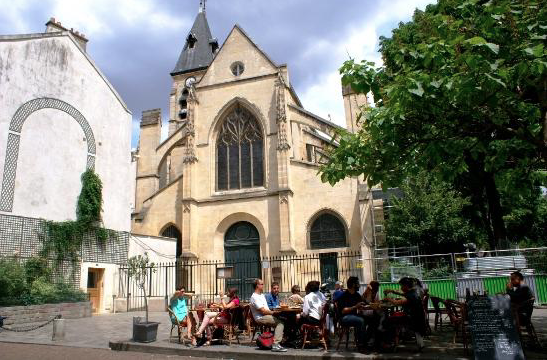 Just ten feet across the street, carts full of fresh fruits line the narrow sidewalks, their owners cajoling the passers-by with offers of discounted items. Each shop door is separated by inches from its neighbor and the lush colored curtain tapestries hanging from the windows model the medieval past of Paris.

The origin for the name ‘Rue Mouffetard’ has an interesting, if not slightly pungent history. The word mouffet in French means literally ‘skunk’. The street was notoriously crowded with animal skinners, clouding the street with odors of pestilence from the recently carved pelts. We can be thankful those foul scents have been notably replaced by the scent of the fromageries and fresh bakeries along the bustling road. Most of the street itself is blocked from automobile traffic – again, enforcing the feeling of timelessness.

To walk just a few steps up the steady incline of the Rue Mouffetard is to walk through Parisian history – and like most of the streets of this European city, the past exists, side by side, along with our modern, technologized life.

*Matthew D’Abate is an independent director, writer, and producer of short films, documentaries, and music videos. He is the Founder of LITERATE SUNDAY, an online writers/readers group dedicated to helping emerging writers from all over the world. He is also the host and producer of HOW WE LIVE NOW, a podcast dedicated to arts, culture, and travel.