The 12 Best French Musicals You Can Watch Now

We’ve listed the most popular French musicals, and we’ve also included French movies based around music that you’ll love. While we highly recommend watching all of Jacques Demy’s musical movies, we’ve only included some of his most famous in our top 12. You can find many more recommendations in the list at the end of this article!

A combination of Mozart’s music and pop-rock, this hit musical, like the movie Amadeus, tells the story of the composer’s life from adolescence to his death. Composer Antonio Salieri might be the most interesting character, and one of his solos remains the musical’s most famous number. Several productions of Mozart, l’opéra rock were staged around the world.

Inspired by 1960s New Wave films, Les Chansons d’Amour follows three Parisian characters who are entangled in a love triangle. Composer Alex Beaupain wrote the movie’s catchy songs, which fit into the “pensive French pop” genre. Unfortunately, the lyrics were translated rather awkwardly into English, so you might find yourself wincing at some of the subtitles (“Keep your saliva as an antidote/Let it trickle like sweet venom down my throat”). All the more reason to study the French lyrics!

Based on Jean Dréville’s 1945 La Cage aux Rossignols, this feel-good movie is about a group of orphaned boys at an oppressive boarding school who learn to sing thanks to their teacher (played by Gérard Jugnot). The film was a huge success: it was nominated for eight César awards, won the Lumière, and competed for best foreign film at the Oscars.

If you like movies saturated in color–think Pedro Almodóvar–and you’re a fan of the Agatha Christie aesthetic, then this star-studded camp comedy is for you. Catherine Deneuve, Fanny Ardant, and Isabelle Huppert lead an ensemble cast of women. As they try to solve a Christmas murder mystery, each woman sings her own song. Listen to the soundtrack here.

Gérard Presgurvic’s Romeo and Juliet: From Hate to Love is loosely based on Shakespeare’s famous play. Almost all the musical’s characters know about Romeo and Juliette’s “secret” marriage, and different productions have staged the characters’ deaths in a variety of ways. After the success of Notre-Dame de Paris, this musical came out in 2001 along with The Thousand and One Lives of Ali Baba. It returned to the stage in 2010 and its album continues to sell thousands of copies internationally.

Notre Dame de Paris is one of the most popular French musicals. Based on Victor Hugo’s beloved novel, it has been performed in twenty-three countries finally made its NYC debut at Lincoln Center in July 2022. The 1998 premier of Notre Dame de Paris was such a success that the musical ushered in a whole era of French comédie musicales, including hits like Roméo et Juliette: de la Haine à l’Amour and Mozart, l’opéra rock.

Perhaps the most interesting part of this dark comedy is the surprising lip syncing that takes place throughout it. Characters suddenly start singing famous French songs (by musicians like Johnny Hallyday and Dalida), and sometimes a female character sings with a male voice or vice versa. If you can understand spoken French, try listening to this France Culture episode which investigates the film’s melancholy nature and discusses why the legendary Alain Resnais never wrote his own movies.

Although Starmania would become the most famous French rock operas ever, its creator Michel Berger was told that it “would never work.” Berger ignored his detractors and cast the young Daniel Balavoine as Johnny Rockfort, the leader of a gang called Les Étoiles Noires. The musical’s futuristic plot and cutting-edge songs made it an instant success. Starmania has inspired countless musicians and is a must-watch for French musical fans. Listen to this radio episode that celebrated the musical’s 40th anniversary to practice your French!

One of the catchiest French musical films ever, The Young Girls of Rochefort stars Catherine Deneuve and her real-life sister Françoise Dorléac, who play twins Delphine and Solange. When a fair and a group of sailors arrive in their quiet seaside town, the sisters realize that they might have the chance to escape to bigger cities. If you love classic musicals like Singing in the Rain, then you must see this. Gene Kelly performs a great dance in it!

Catherine Deneuve rose to fame for her starring in this beautiful, tragic film. You can watch New York Times film critic AO Scott explaining what makes The Umbrellas of Cherbourg so great here. If you would like to practice your French, listen to “Les Parapluies de Cherbourg, tragédie inouïe.” You’ll learn about why Demy called the movie “un film en-chanté” instead of une comédie musicale. If you’ve already seen Demy’s two most famous musical films, we recommend checking out Peau d’âne (Donkey Skin), which features on our best French movies for kids list!

Set in the Past: French Cancan

You probably know of the French painter Pierre-Auguste Renoir, but have you watched his son’s films? In French Cancan, Jean Renoir paints a vibrant portrait of the opening of the Moulin Rouge. Jean Gabin stars in this classical musical, and Edith Piaf has a cameo!

We recommend this movie to students who speak French at an advanced level and to those who are familiar with the popular French musician Claude François. Podium stars a variety of extremely popular French comedians. It’s about a banker whose dream is to become a famous Claude François cover artist/look alike. We don’t want to spoil the story for you, so all we’ll say is that the film is a wild ride.

Other French musicals to check out for diehard fans: 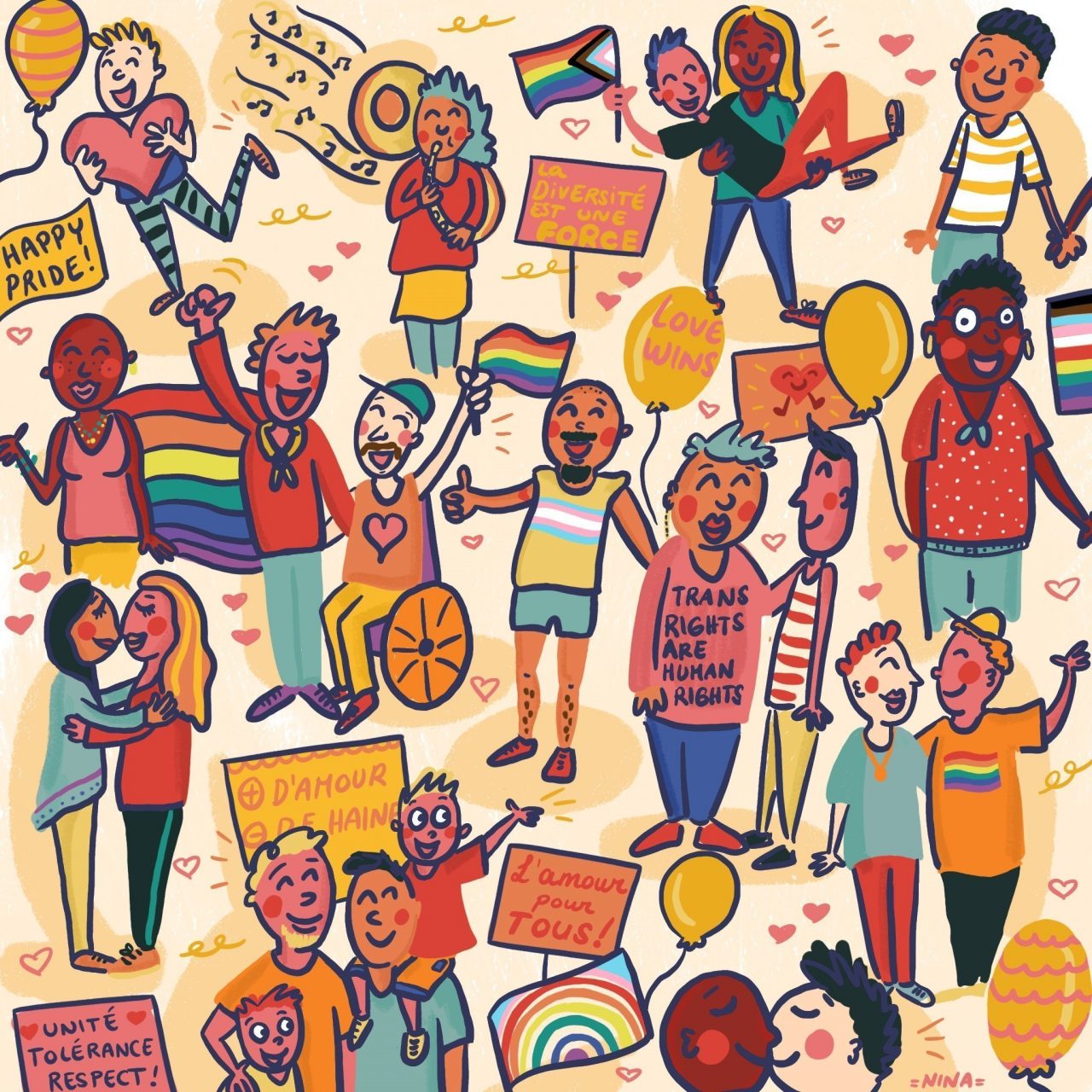