When you think of French fashion designers, whose name springs to mind first? Christian Dior? Yves Saint Laurent? Most of France’s most celebrated couturiers are gay men. In fact, you’d probably be hard-pressed to name a French fashion designer who isn’t gay (apart from Coco Chanel!). As this French Slate article explains, gay men have excelled in the art of dressmaking since the early 20th century. While it’s true that haute couture in France traces its origins to two heterosexual designers (Charles Frederick Worth and Paul Poiret), since around WWII, gay designers have dominated the industry.

To continue celebrating Pride Month, we’ve put together a list of the most famous gay couturiers. You’ll learn about the inspirational careers and most iconic designs of classic couturiers like Pierre Balmain, and also discover newer couturiers like Simon Porte Jacquemus and Olivier Rousteing, who are currently reinventing French culture. Finally, you’ll have lots of opportunities to brush up on your language skills with our “Practice your French” tips that allow you to delve deeper into the lives of these revolutionary designers. Want to start off with a little French practice right now? Read “Les 11 plus beaux hommages de la mode à la culture queer” (Fashion’s 11 most beautiful tributes to queer culture”) here! 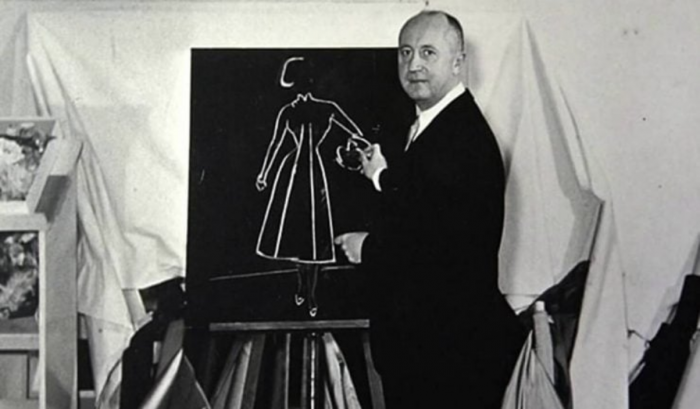 Although he had trained for the French foreign service, Dior began working for the Figaro Illustré in the 1930s. (See his early designs here.) In 1938, he became an assistant designer for Robert Piguet, Paris’s leading couturier. Financed by French entrepreneur Marcel Boussac, Dior created the New Look in 1947, which became a worldwide sensation. Dior went on to create many famous silhouettes (the A-line, the H-line, the Y-line…) and he revolutionized the world of French fashion throughout the 1950s until his death. In 1957, his assistant Yves Saint Laurent (see below!) took over the House of Dior. 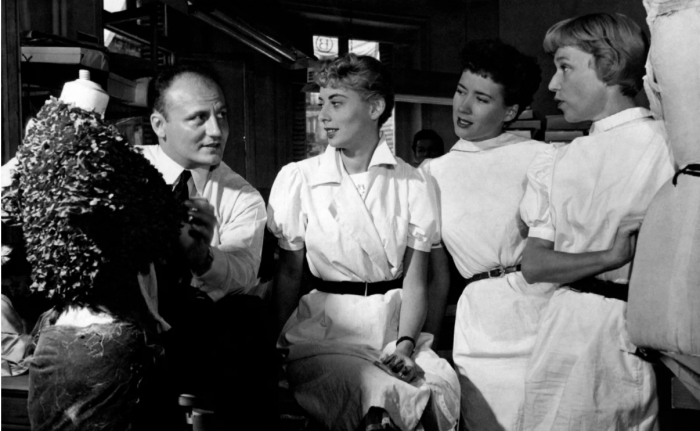 In 1945, Pierre Balmain founded a legendary fashion house that made his name synonymous with elegance. He designed clothes for stars Marlene Dietrich, Katharine Hepburn, Brigitte Bardot and Sophia Loren. He also dressed the Duchess of Windsor, the Queen of Belgium, and even famous modernist author Gertrude Stein! In episode 4 of “L’Atelier Balmain Podcast” you can learn about his friendship with Stein and her famous partner Alice B. Toklas. Check out images of some of his most celebrated dresses and clients here. 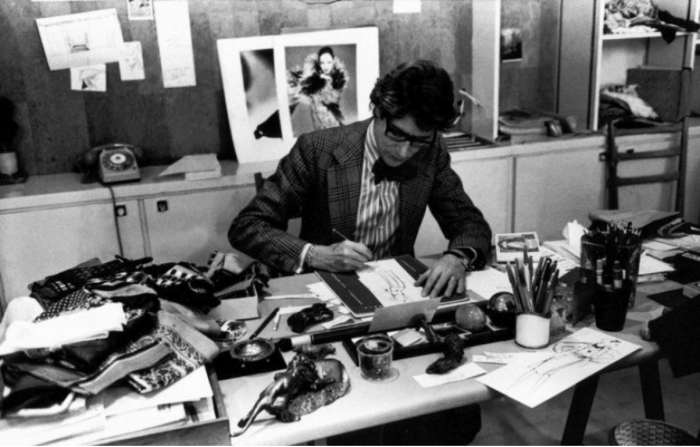 Born in Oran, Yves Saint Laurent left for Paris to pursue a career in fashion and attended design school for a short period. When Saint Laurent was only 17, Dior, after seeing some of Saint Laurent’s sketches, hired him as his assistant and protégé. Saint Laurent took over the House of Dior after the designer’s death, and introduced many famous looks including the chic beatnik style. In 1962, Saint Laurent opened his own fashion house, emerging as one of the youngest and most influential French couturiers. He used metallic and transparent fabrics, popularized pants for women, and introduced the haute peasant look. You can read about Saint Laurent’s relationship with his romantic and professional partner, Pierre Bergé, here. The Musée Yves Saint Laurent’s website includes an excellent interactive biography of Bergé and Saint Laurent. 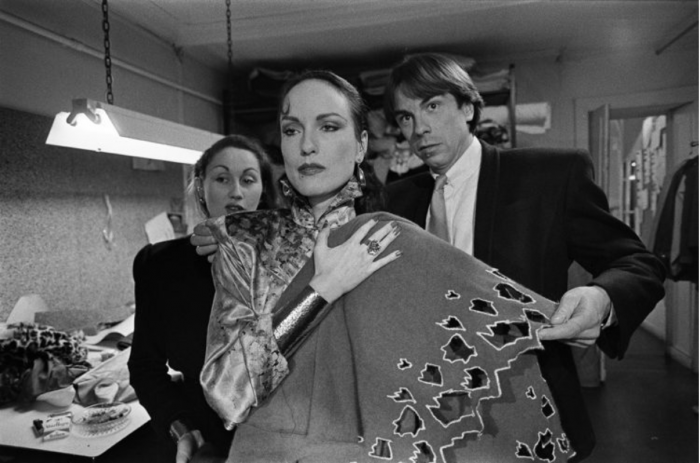 Former ballet dancer and fashion designer Thierry Mugler is known for creating some of the most over-the-top moments in fashion history. From the 1970s until 2002, when he quit the fashion world, the designer established himself as one of the most daring and inventive couturiers of his time. In 1984, he orchestrated Pat Cleveland’s descent from the ceiling of Le Zénith Paris. He also designed the clothes for George Michael’s iconic “Too Funky” music video. In the 1990s, he contributed to the renaissance of haute couture with his innovative collections, grandiose photo shoots, and his staging of spectacular fashion shows. Watch a New York Times interview with the designer here. 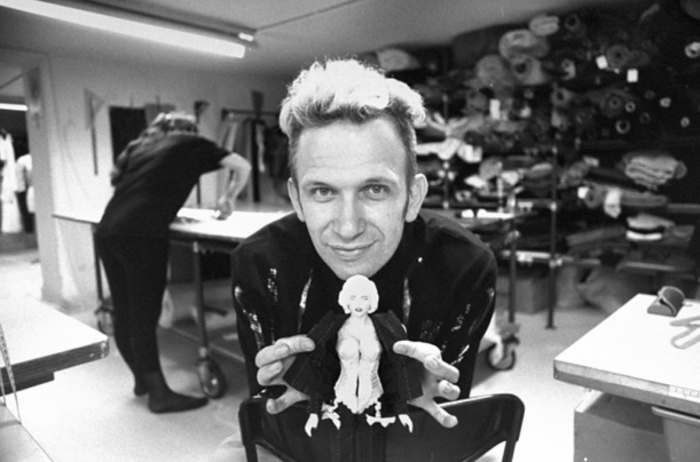 A lifelong lover of fashion, at 13 Jean-Paul Gaultier created a collection of clothing for his mother and grandmother and started working for Parisian designer Pierre Cardin when he was only 18. He opened his first boutique in Paris in 1984 and his product line became an enormous success. Gaultier created some of Madonna’s most iconic looks and also designed costumes for a variety of films including Peter Greenaway’s controversial The Cook, the Thief, His Wife, and Her Lover (1989) and Pedro Almodóvar’s Bad Education (2004). Gaultier was Hermès’s official designer from 2003 to 2011. 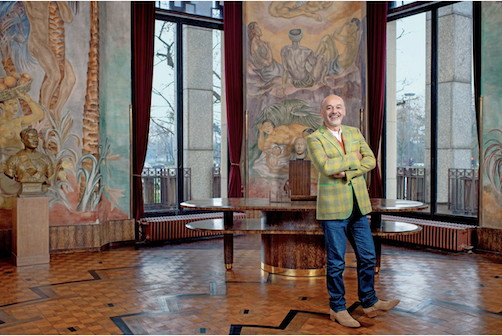 After a short stint in design school, Christian Louboutin began designing les escarpins (high heels) and sold a few of his creations to the dancers at les Folies Bergères. After doing freelance work for Chanel, Hervé Léger and Maud Frizon, he opened his own brand in 1991 with the help of Henri Seydoux (father of actress Léa Seydoux!). Less than a year after opening his store in Paris, he began receiving visits from celebrities and Vogue’s fashion editor Anna Wintour. In 1995, he became le chausseur (shoe creator) for a variety of designer shows. He has collaborated with Jean Paul Gaultier, Azzaro, Givenchy, Lanvin, Chloe and Yves Saint Laurent and has also worked with David Lynch on the film Rouge. 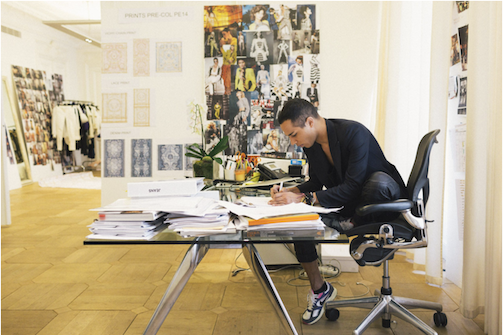 Oliver Rousteing was adopted when he was an infant and grew up in Bordeaux. He moved to Paris when he was 19 and studied at ESMOD, the world’s oldest fashion school. After graduating, he worked for Roberto Cavalli and then joined Balmain, where he became artistic director at only 25. Rousteing is close friends with Rihanna and has designed clothes inspired by her as well as by Beyoncé and Kim Kardashian. 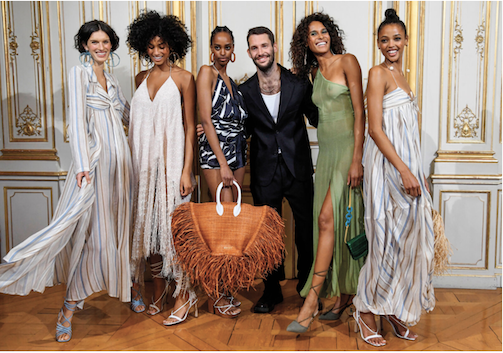 Born to farmers in rural France, Simon Porte Jacquemus first studied fashion at ESMOD, but left school to become artistic director of Citizen K. Following the death of his mother, he opened his own company Jacquemus (an homage to his mother’s maiden name) at the age of 20. In 2014, he collaborated with La Redoute and was awarded the LVMH Prize a year later. Inspired by Jacques Tati and Picasso, Simon Porte Jacquemus particularly likes to use workers’ clothes as the basis for his designs. Today, he sells his creations in various boutiques in Paris, London and New York. Earlier this month, he announced his engagement to Marco Maestri on Instagram!