Although many beloved Christmas carols originated in England or Germany (cue “O Tannenbaum”), there are quite a few French chants de Noël that are worth a listen. Below, you’ll find our ultimate French Christmas playlist, which includes French covers of famous carols like “Jingle Bells,” as well as original French songs such as “Les Anges dans nos campagnes.” (Which you’ll recognize as “Angels We Have Heard on High”!) Our playlist also features classic French composers and singers including Claude Debussy, Édith Piaf, Charles Aznavour, Johnny Hallyday and the inimitable Tino Rossi!

This French cantique de Noël was written at the end of the 15th century. The English version is called “Sing We Now of Christmas.” If you love this kind of choral music, check out this video of a chorus singing “Douce nuit” (“Silent Night”), “Noël Nouvelet” and other classics.

The melody of “Angels We Have Heard on High” is based on this traditional French song. While most of the French lyrics are different from their English counterpart, the “Gloria in excelsis Deo” chorus remains in the French version. This means that you can make the same cheesy joke in French and English: Question: “How many syllables does the word “Gloria” have?” (Combien de syllabes compte le mot “Gloria” ?) Christmas fan’s answer: “18.”

Famous French composer Claude Debussy wrote this piece (for voice and piano) in December 1915 in the middle of the First World War. It’s a patriotic song about the German Occupation of France. This is Debussy’s last composition.

In our article about how the French celebrate Christmas, Coucou teacher Victoire explains that her family listens to French singer Tino Rossi’s songs every Christmas. We chose his classic “Petit Papa Noël” (recorded in 1946) for this list, but all his Christmas songs are great. Listen to a collection of them here.

Beloved French icon Édith Piaf isn’t known for her Christmas music, but this song, recorded in 1951 is just exquisite. On the other side of the song’s original record was French group Les compagnons de la chanson’s version of “Douce nuit.”

French actor and singer Fernandel recorded this song in 1956 and it’s remained popular ever since. Tino Rossi covered it as well as a variety of other French artists.

This 1960 version of “Jingle Bells” is one of our favorites. If you’ve never heard of Dalida, you should know that she’s incredibly famous in France and there’s a beautiful place named after her in Paris! One of her songs features on our “Top French Songs of the 1970s” article.

If you’re not already a fan of Jacques Dutronc, you should be. He was married to amazing singer Françoise Hardy (she and their son Thomas feature in our recent article about French parenting!). Dutronc’s song lyrics are always hilarious and original. “La fille du Père Noël” (1966) is about the son of le Père Fouettard who tries to seduce Santa Claus’s daughter. Basically, le Père Fouettard is supposed to punish naughty children at Christmas so the fact that his son Jean Balthazar hits on Santa’s daughter (Marie Noël) is pretty scandalous!

In 1978, beloved French singer Charles Aznavour (often called the French Sinatra) released his album Un enfant est né (A Child is Born). The album has ten Christmas carols on it, including “Noël à Paris.” The song was reissued in 1996 and in 2000, for an AIDS awareness event called “Noël Ensemble.”

This 2005 song, recorded by French singer Johnny Hallyday, remains hugely popular in France. If you’ve never heard of “Johnny,” you should know that he’s a French legend and that the entire country was in mourning when he passed away in 2017. We published a blog post about him back in 2016!

Listen to all these songs and more on our Spotify Playlist! 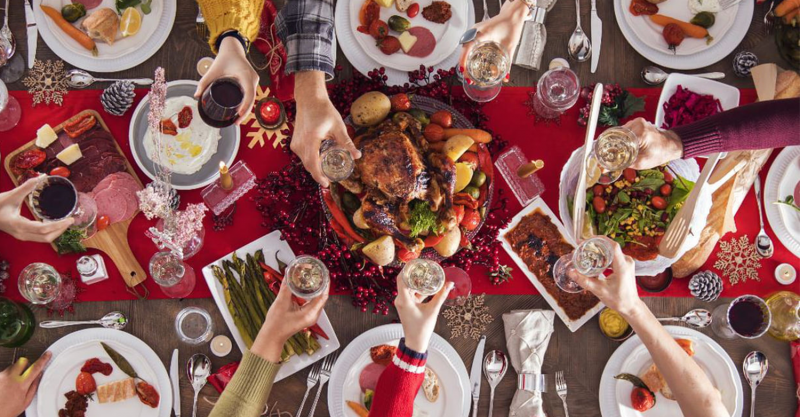 How to Make the Perfect French Christmas Dinner

Our fête de Noël recipe guide for cooks of all levels!

Here are the holiday movies the French watch every year!