We’ve updated last year’s list of the best French shows to watch online to include new series like Netflix’s Lupin as well as a few movie recs. Now is the time to watch (or rewatch) the first two OSS 117 films before the third one (OSS 117: Alerte rouge en Afrique noire) is released later this year!

Also, in case you missed them, check out some of our other recent articles that include streaming recommendations:

The Greatest French Movies for Kids

The Best of French Cinema Since 2000

Lupin came out earlier this month and everyone has been talking about it in France. Set in Paris, it stars beloved actor Omar Sy (you might know him from The Intouchables) who plays the son of a Senegalese chauffeur unjustly accused of theft. To seek revenge, he concocts a jewel heist based on the stories of gentleman cambrioleur (burglar) Arsène Lupin, the famous fictional creation of Maurice Leblanc. If you’re a fan of Killing Eve, Sherlock or Luther, this series is for you.

The New York Times describes this show as the French hybrid of “Curb Your Enthusiasm,” “Entourage,” and “The Office.” “Call My Agent” is about a group of Parisian talent agents who try to juggle the careers of their clients as well as their own complicated love lives. Each episode features real-life stars such as Jean Dujardin, Juliette Binoche or Sigourney Weaver. The show is touching and funny, and an excellent way to discover who the big names in French cinema are at the moment. Season 4 was released on Netflix on January 1st!

The French equivalent of Homeland, The Bureau has repeatedly been voted “Best TV Series” by the French Syndicate of Cinema Critics, and has also been acclaimed by critics abroad. While its pace is much slower than that of your typical espionage thriller, the series is always riveting. The show follows members of the DGSE (the French CIA) and stars actor and director Mathieu Kassovitz. Name sounds familiar? You’ve probably seen him in Amelie. Kassovitz plays Guillaume Debailly, a dashing spy who is forced to return to Paris after six years in Damascus. A Coucou favorite!

This series’ stars have terrific chemistry, and the show gives you a real taste of what life is like for twenty-somethings in Paris. Unfortunately, the second season isn’t as good as the first, but we still recommend it! The show is about Elsa (Zita Hanrot) who unwittingly falls in love with a dashing male escort (Marc Ruchmann). Watch this if you were addicted to the first season of Girls or if you need a fix for your romcom craving. Season 3 will be released soon. 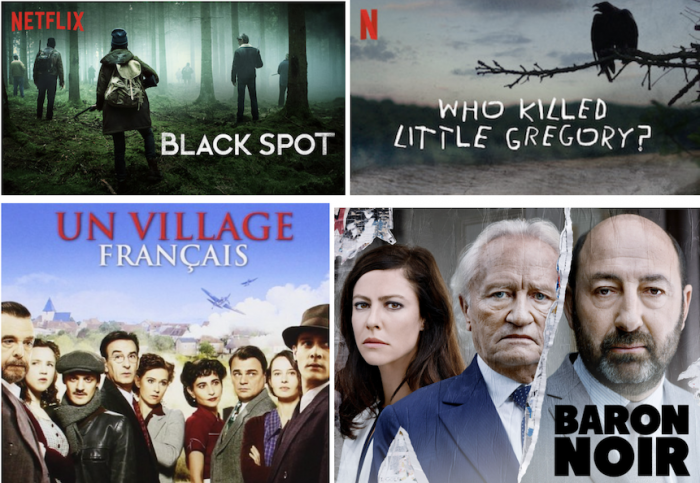 Céline Sciamma’s exploration of friendship, love, and art is an absolute masterpiece. Portrait of a Lady on Fire won the Queer Palm at Cannes and was praised for its historical accuracy, fantastic screenplay, and breathtaking cinematography. And let’s not forget the music: if you haven’t watched the movie yet, prepare to get chills during the bonfire chanting scene. Set in the 18th century, the movie’s about a young female artist (Noémie Merlant) who is commissioned to paint a portrait on a remote island. Slowly, she gets to know the aloof subject of her portrait (Adèle Haenel) and eventually begins to tutoyer her (that is, address her with the informal pronoun “tu” – see if you notice this critical moment while watching!). Le regard féminin (female gaze) has rarely been so powerfully captured on screen.

Fans of Spike Lee’s groundbreaking Do The Right Thing and Mathieu Kassovitz’s La Haine will love Ladj Ly’s gut-wrenching portrait of la banlieue (the suburbs). The film is set in Montfermeil, where Victor Hugo’s famous novel also takes place.  But be prepared for a very different depiction of Montfermeil. In his review of the movie, Anthony Lane writes that “Victor Hugo would watch this film and weep.”

This film is an adaptation of Pierre Lemaitre’s novel of the same name, which won the Prix Goncourt in 2013. Set at the end of World War I, the movie is about two men who set up a swindling operation. A great introduction to actor, director  and screenwriter Albert Dupontel’s films.

Directed by Robin Campillo, who also made Les Revenants (2004)–the film that inspired the series of the same name–this contemporary classic stars Nahuel Pérez Biscayart and Arnaud Valois. They play two members of Act-Up, an advocacy group formed at the height of the AIDS epidemic in the 1990s. Act-Up France protested against the French government’s inadequate response to the growing HIV/AIDS crisis, and the film portrays the heartbreaking plight of the group’s members as they navigate life, love and political activism.

Stream on Hulu or Kanopy

Michel Hazanavicius is famous in the US for his Oscar award-winning movie The Artist, but the French adore his OSS 117 comedies even more. Starring Jean Dujardin, who plays hapless secret agent 117, the films parody spy flicks and French ‘60s culture. They’re a must-watch for students who want to learn more about modern French cult classics. Now is the time to watch the first two OSS 117 before the third one (OSS 117: Alerte rouge en Afrique noire) is released later this year!!

Director Agnes Varda beautifully captures Paris in the sixties with this portrait of a singer (Corinne Marchand) set adrift in the city as she awaits test results of a biopsy. A chronicle of the minutes of one woman’s life, Cléo from 5 to 7 is a must-see for French cinema fans. It features a score by Michel Legrand (The Umbrellas of Cherbourg) and cameos by Jean-Luc Godard and Anna Karina.