French Around the World: Belgium

Did you know that French is the native language of over 200 million people? Because French has spread across five continents, it has evolved in many surprising and exciting ways. Our “French Around the World Series” highlights different variations of the language so that you can enrich your vocabulary and impress francophones with your in-depth knowledge of their culture. Check out our posts about Swiss French here and Quebecois French here.

This week we’re heading to the southern part of Belgium known as Wallonia. Thanks to the fact that Flemish and French are both spoken in Belgium, Belgian French includes quite a few words and expressions of Flemish origin like spitter (to splash), en stoemelings (to do something discreetly) and dringuelle (pocket money). But one of the coolest things about Belgian French is its sound effects. Belgians love les onomatopées. For instance, they call a spray “un pshitt” and when something happens that’s surprising, they say “klet!” To indicate that something’s moving really quickly, they say “rouf.” If there’s a problem or they’re afraid something bad will happen, they say “ouille-ouille.”

Want to find out more about le français belge? We imagine that the answer’s yes (or “non peut-être”)! 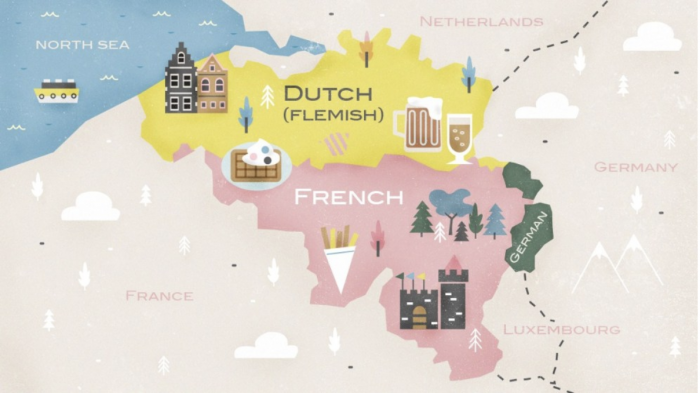 As you can see from the map above, most Belgians speak either Dutch (about 60 percent of Belgians) or French (about 40 percent). But Belgium actually has a third official language spoken by 1 percent of its population: German! Seems relatively straightforward, right? Unfortunately, it gets a little (actually a lot) more complicated when it comes to Belgian dialects. First of all, many Belgians who speak Standard German also speak Luxembourgish. And while Belgian-Dutch (a.k.a. Flemish) is very similar to Netherlands-Dutch, there are tons of varieties of Flemish. There’s East and West Flemish, Low Dietsch, Limburgish, Brabantian… the list goes on.

Thankfully, since this article is about Belgian French we don’t have to worry about all those Flemish dialects! You should know, however, that Belgian French is not standardized, and includes words borrowed from regional languages such as Champenois, Lorrain, Picard, and Walloon. As the website of the French embassy in Brussels explains, there is no “standard” version of Belgian French. In fact, you can find all sorts of French spoken in Brussels, including the famous Franco-Flemish creole known as brusseleir.

How to sound Belgian

As any French-Belgian speaker will tell you, there isn’t one Belgian accent. Nevertheless, many French comedies make fun of the stereotypical accent belge. In fact, almost every French person knows at least one of “les blague belges” (belgian jokes), which are usually humorous stories that involves a Belgian character who talks with an exaggerated accent and is absurdly stupid.

There’s a whole scene about the Belgian accent in Le dîner de cons, and the cult film Dikkenek also helped popularized the Belgian/Brussels accent. Dikkenek comes from the Flemish words dikke (fat) and nek (neck) and is a popular French Belgian word for “braggart” or “big mouth.” The movie plays on the stereotype that people from Brussels have big mouths. (Sidenote: even though it stars Melanie Laurent and Marion Cotillard, Dikkenek is relatively unknown in the U.S. We recommend watching it if you want to learn about Belgian humor!) 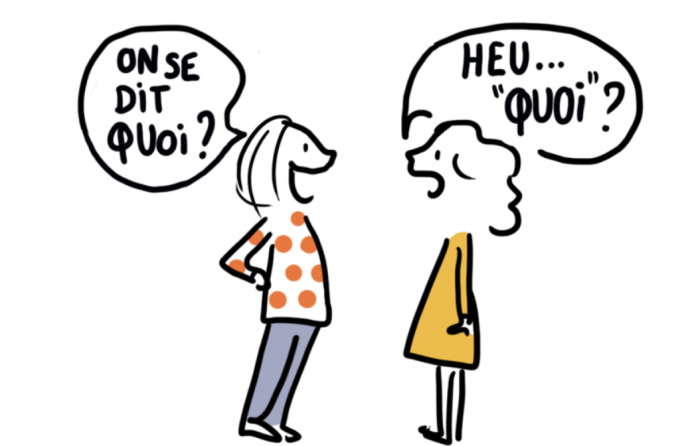 À Houtesiplou: In the middle of nowhere. Houtesiplou can also mean an imaginary place.

Dire quoi: In French, when you want to tell someone that you’ll keep them updated, you say, “Je te tiens au courant.” But the Belgians say, “Je te dis quoi” (literally: “I will tell you what”). This can lead to some pretty comical misunderstandings. In the photo above, a Belgian asks a French friend if she’ll stay in touch, but the friend thinks she’s simply supposed to say the word “what.”

Example: On s’appelle et on se dit quoi. – We call each other and keep in touch.

Faire une baise : Faire une bise means to give someone a kiss in French. Faire une baise is the Belgian way of saying this, but, be careful!! The word baise is actually quite naughty in French so make sure you don’t mix up when you say bise and baise.

Example: Tu me fais une baise ? – Will you give me a kiss?

Ne pas avoir toutes ses frites dans le même sachet: There are lots of ways of saying this in English: “He’s not the sharpest knife in the drawer” or “the brightest bulb” etc. The French say, “Il n’a pas la lumière à tous les étages” (“He doesn’t have light on all floors). But the Belgians say, “He doesn’t have all his fries in the same bag.”

Non peut-être: While this literally means “No maybe,” it actually means oui! Belgians use it sarcastically when the response to a question is obviously yes. Here’s another video made by La Minute Belge that explains this common phrase.

Want to learn a few more belgicismes? Here’s a great dictionary of them! 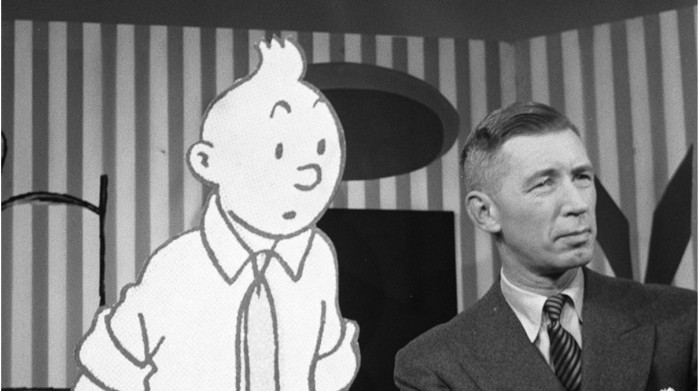 You might know that Tintin’s creator Hergé was Belgian, but did you know that almost all of the most famous bandes dessinées (French comics) were written by Belgians? This France Culture article explains why! Other Belgian authors you might want to read are Georges Simenon (one of the greatest mystery authors of all time!) and Amélie Nothomb, who was nominated for the Prix Goncourt this year. If music is more your thing, you should listen to the iconic Jacques Brel, Stromae, and Angèle, one of our favorite contemporary francophone musicians. And if you’re passionate about francophone cinema, you should watch a few of the Dardenne Brothers’ films. We recommend their early film La Promesse and their more recent Deux jours, une nuit.