French Around the World: Switzerland

Did you know that French is the native language of over 200 million people? Because French has spread across five continents, it has evolved in many surprising and exciting ways. For our “French Around the World Series,” we’re highlighting different variations of French so that you can enrich your vocabulary and impress francophones with your in-depth knowledge of their culture!

This week: Swiss French. Before we get started, there are a few basic things you should know. The French speaking region of Switzerland is called Romandy in English and la Romandie or, more commonly, la Suisse romande in French. The people who live in this region are therefore called les suisses romands. And, finally, there’s a special term for words that only les suisses romands use: les helvétismes. If you read French at a very high level, you can learn all about les helvétismes here! 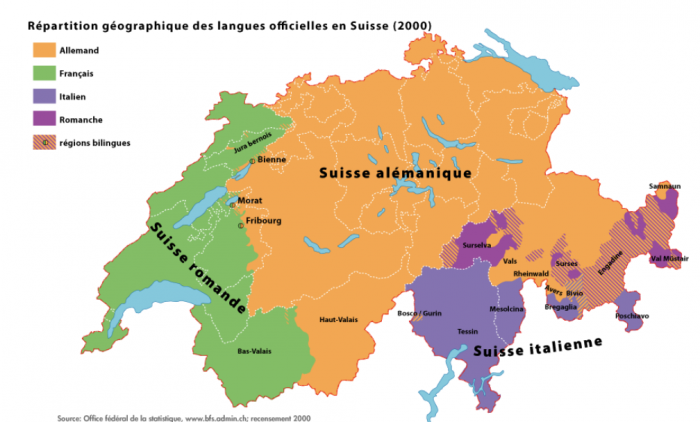 Considering how small it is, Switzerland boasts a large variety of languages. As you can see from the map above, in south-eastern Switzerland (famous for its lakes), you’ll find Italian speakers. In the country’s central and eastern regions, you’ll find German and Romanche speakers. And in western Switzerland, particularly the Geneva region, you’ll find French speakers, who might also speak one of Switzerland’s specific dialects, like Franc Comtois. Here’s the cool thing: if you travel to officially-bilingual cities in Switzerland like Fribourg, you’ll find that every street sign is written in both French and German!

The image above is from this French blog that’s dedicated to Swiss accents and vocabulary. If you feel confident reading in French, take a look at a few of the author’s articles about the different variations of Swiss French. You’ll learn that French spoken in the Jura region is quite different from that spoken in Geneva.

Many French people swear that they can recognize Swiss accents, but, in fact, there is no standard Swiss-French accent. Parisians and Quebecers might tell you that Swiss people speak French more slowly, but linguists have disproven this claim. Actually, what differentiates the Swiss accent is its emphasis on penultimate syllables. That is, “standard” French speakers emphasize the last syllable of words and sentences. Swiss French speakers, on the other hand, tend to accentuate the second-to-last syllable of phrases, which changes the rhythm of their speech.

Like les belges et les québécois, les suisses pronounce certain vowels very differently than les français. For instance, the words peau (skin) and pot (this is an easy one: pot!) are pronounced the same way in France. But in Swiss French, the O vowel sound changes between the words. Want to see French speakers try (and often fail hilariously) to imitate Swiss accents? Watch this French video! 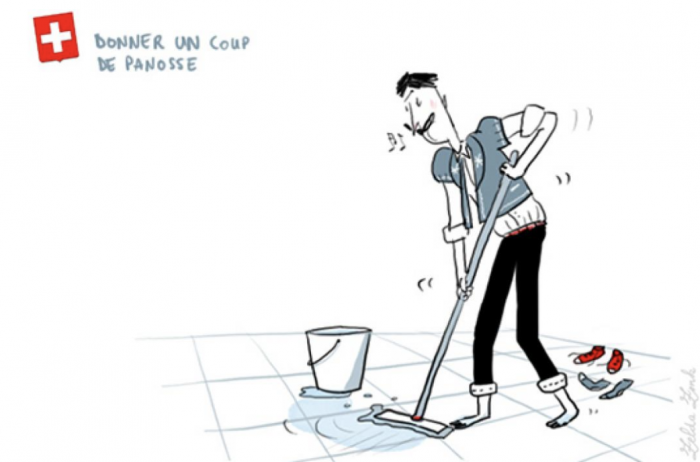 One of the most famous Swiss-French words is natel, which means cellphone. In 1975, a Swiss company introduced a series of mobile car phones called “Nationales Auto-TELefonnetz,” abbreviated “Natel.”  Although this expression is not really used anymore and now a little cliché, many others words are unique to Swiss-French. For instance, the Swiss call a jacket une jaquette, whereas the French call it une veste. See more common examples at the bottom of this Wikipedia page. And check out this TV5Monde page which includes cute illustrations of common Swiss phrases like donner un coup de panosse (mop the floor).

Here are some other essential Swiss-French terms to know:

– Ça joue – This is the Swiss equivalent of the French phrases “ça marche,” “c’est bon” and “ça va.” Basically it means that all’s going well.

– À quelle heure vit-on? – The French use “quelle heure est-il?” to ask what time it is, but the Swiss literally ask, “At what time are we living?”

– Extra bleu ciel! – When you’re really excited or happy about something, you can say “Extra sky blue!” in Swiss French. This phrase is a little old-fashioned, but we think it’s super cute.

– Sans autre – “No problem.” pas de problème is what they say in France.

– S’encoubler – This is a fun Swiss verb that means to trip. Rather than saying, “J’ai trébuché” like the French do, the Swiss often say, “Je me suis encoublé(e).” Careful with your conjugation: this is a reflexive verb!

– Tout de bon – When you want to wish someone well in French, or say “Good luck with X,” you typically use the phrase “Bonne continuation.” “Tout de bon !” is the Swiss way of telling someone you wish them all the best.

– “Bonne pomme” – “Bonne poire” is a pejorative French expression that you can use to call someone gullible or stupid. But rather than saying “good pear,” the Swiss say “good apple” (bonne pomme).

Other Important Aspects of Swiss French 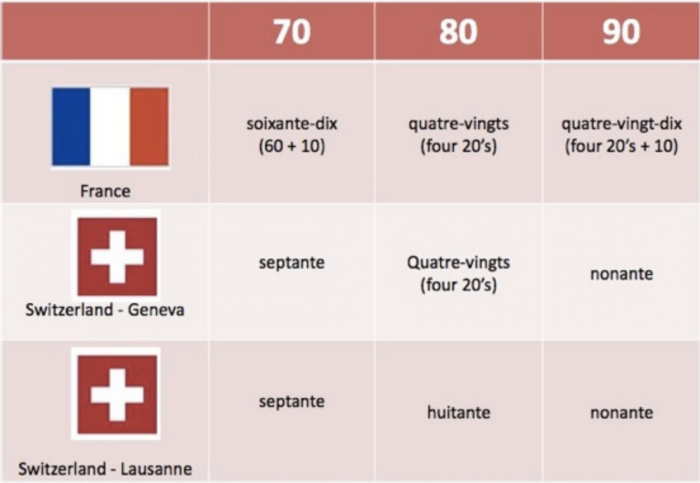 As any student who’s studying French knows, mastering the unique (and utterly annoying) French number system can be a challenge. This meme sums up how frustrating and illogical French numbers seem at first to non-French speakers. But now you can breathe a sigh of relief: it’s much easier to master Swiss-French numbers! In Belgium and Switzerland, French speakers say septante and nonante rather than soixante-dix and quatre-vingt-dix. However, the number 80 varies; in some parts of Switzerland, French speakers say huitante and others say quatre-vingts.

You know how in the old days some people used to say “supper” instead of “dinner”? Well, that difference still exists between France and Switzerland. The Swiss say le souper and the French say le dîner. And here’s the really confusing part: the French call lunch le déjeuner and breakfast le petit déjeuner, whereas the Swiss call lunch le dîner and breakfast le déjeuner! 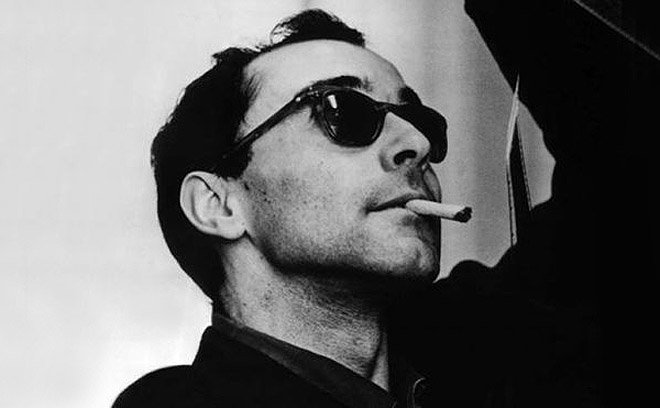 Bond girl Ursula Andress was born to Swiss German parents, and, like many Swiss Germans, spoke fluent French. Watch her speak French in an interview here. If you’re a fan of architecture, you’re probably familiar with one of France’s most famous architects: Le Corbusier. But did you know that he was from Switzerland? Other famous Swiss people include Jean-Luc Godard, Jean-Jacques Rousseau, Blaise Cendrars, Henri Dès, Patrick Juvet, Vincent Pérez, Zep, Ferdinand de Saussure, Albert Cohen, and William Tell.

Joseph Gorgoni is a very popular Swiss comedian whose alter-ego, Marie Thérèse Porchet, gives lessons about Switzerland in French. Unfortunately, her videos are only available with French subtitles. But even if you have trouble understanding everything she says, you might enjoy watching her videos to get a taste of Swiss culture.