11 “Faux Amis” to Keep in Mind When Speaking French

“Same sounds, different meanings.” One of the great things about learning French as a native English speaker is being able to use all of those cognates. “What’s a cognate?” you ask.

You know when you pronounce an English word with a French accent and *poof!* you’ve just said a véritable French word? That’s the power of using cognates. The problem is that there are just as many false cognates out there as there are real ones. These false cognates are colloquially called faux amis or “fake friends.” Here are eleven of the most common fake friends between French and English.

Traveling to a francophone country is so much fun that you might feel compelled to tell people about your “journey.” The problem is that in French, the word journée is another way to say “day.” If someone tells you “bonne journée,” they’re saying “have a nice day”, not “have a nice journey.” If you do want to talk about your journey, the most appropriate word to use is voyage.

Maybe you’re going to a Francophone country as a celebration for finishing your education. In this case, don’t go around telling people that you’re traveling pour ta graduation. In French, the word graduation only has to do with measurements, and you might come across as a tad nerdy if the people you meet think you’re traveling with a bunch of pipettes in your backpack. Instead, tell them that you’re celebrating your remise de diplôme.

When learning French, especially through literature, the verb crier comes up a lot. That’s because it means “to shout,” and not “to cry” despite the similar spellings between the two verbs. Don’t worry, the characters in your favorite French books aren’t crying all the time. If they were, the author would be using the verb pleurer.

A restaurant will have multiple sections on its menu, and one will inevitably be titled “Les entrées.” These are not the main courses, like entrees are in the US. These entrées are actually appetizers or hors d’oeuvres. You can remember this by thinking about how the word entrée comes from the verb entrer, which means « to enter ». In this sense, une entrée is what you order to enter your meal! If you’re looking for a main course, check out the section that says plats.

Not necessarily un faux ami, because occasion can be used to mean “occasion” in English. However, don’t forget its second meaning. If you find yourself in a boutique d’occasion, you should definitely check it out. It’s a thrift store, and who doesn’t want to explore the second-hand items of a stylish Frenchy?

If someone mentions that something is sale, it doesn’t mean that the thing is being sold for less than its usual price, but that it’s “dirty.” If you’re looking for something on sale, look for the word “soldes.”

Fun tip: In Paris, les soldes (the sales) happen twice a year, once in the summer and once right after Christmas. If you’re not there during those lucky seasons, keep an eye out for a promotion or a soldes exceptionnelles. Check out this great link to learn more about the ins and outs of les soldes!

You’ll notice the word actuellement in a lot of French news and in transit stations. That’s not because the French news is run by a bunch of sassy people looking to correct the entire French public, but because actuellement means “currently.” If you want to use the word “actually” while speaking French, it’s better to employ the phrase en fait (make sure you pronounce the final “t!”).

In France, if you want to ask someone where something’s location is, you can ask them for its endroit or emplacement. If you say the word location, you’re asking about a rental. There’s absolutely nothing wrong with renting in France, but make sure your credit is ready to handle the expensive consequences of this language faux-pas! 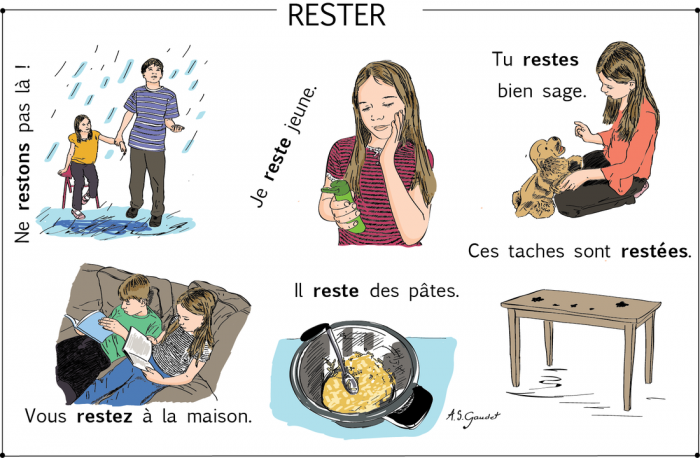 In French, the verb rester means “to stay.” If you’re looking to relax or take a rest, you can use the verb se reposer.  Now, if you still want to rest and you also want to stay in bed, you can say je veux rester à la maison pour me reposer, and then you’ve used both words to have a perfectly French lazy day.

In French, the word la médecine exists, but it’s only used to mean the study or practice of medicine. If you find yourself getting sick while in a French-speaking country, make sure you say that you need des médicaments. And if you end up finding a cutie who studies la médecine?  Prepare your flirtiest “coucou”!

The strong ties between French and English ensure that a lot of vocabulary you’ll come across will be identical in both languages. However, it’s not a great idea to rely solely on “Frenchifying” your pronunciation of English words and hoping for the best! Study up on these and the many other faux amis to hone your word-choice accuracy for the smoothest conversations possible!